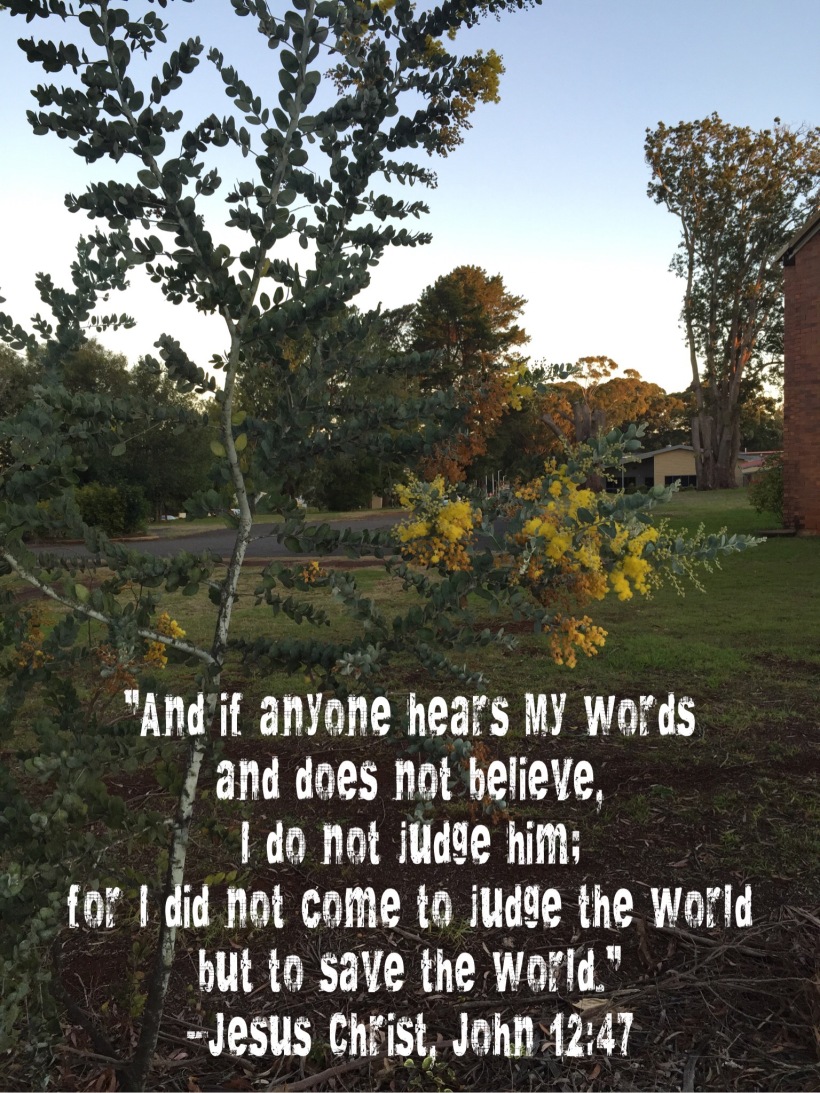 “It was not Jesus’ present purpose to condemn men. He would come to condemn the guilty at a future time. At present He came to save them. Hence He did not now even pronounce decisively on the condition of those who rejected Him, but still gave them an opportunity to be saved.”  ~  Barnes’ Notes on the Bible

It might be a poignant time for us Christians to take some time to remind ourselves exactly what the gospel, the good news, is.

It’s pretty clear to each of us that none of us is perfect. We’re all the same – all flawed. But what is God’s solution? More rules to follow? Indeed, eternal & civic laws apply universally to all of us & choices will always have consequences. But again, what is God’s solution to our inability to attain perfection – His once & for all time solution? For a wholly deficient humanity, it is very good news!

It wasn’t Christ’s present business to be concerning himself with judging civic matters. The Pharisees had that well & truly covered.

No, Christ’s sole concern was in redeeming humanity.
And in providing the way for that redemption, according to His own words recorded in John 12:47, He amazingly offered himself to the world unconditionally. In this age of grace that has since followed, the door of opportunity remains open.

Mark Yarhouse articulates our mandate for redemption well in the article Understanding the Transgender Phenomenon:

Most centrally, the Christian community is a witness to the message of redemption. We are witnesses to redemption through Jesus’ presence in our lives. Redemption is not found by measuring how well a person’s gender identity aligns with their biological sex, but by drawing them to the person and work of Jesus Christ, and to the power of the Holy Spirit to transform us into His image.

As Christians speak to this redemption, we will be tempted to join in the culture wars about sex and gender that fall closely on the heels of the wars about sexual behaviour and marriage. But in most cases, the church is called to rise above those wars and present a witness to redemption.

If you’ve had anything to do with a Christian similar to me, I’d guess that the message of redemption has not always been one clearly resonating with singular focus. For that I apologize unreservedly, and as an ambassador of Christ, I offer His words to you today, wrapped in luxurious grace, delivered with the smile & the embrace of unconditional love:

Jesus said to her, “I am the resurrection and the life. He who believes in Me, though he may die, he shall live. And whoever lives and believes in Me shall never die. Do you believe this?”  John 11:25-26

As a Christian, I am a witness to the message of redemption. If you are interested in checking out this radical, real, redeeming love, I would be delighted to chat with you more about it. And if not… no worries!